Inferno is a revolutionary technology capable of safely denying access to critical areas. The award-winning Inferno Security Barriers are used around the world, from embassies and nuclear storage facilities to shops and distribution centers.

Inferno will cause any intruder additional discomfort. Upon activation an intolerable – but harmless– wall of sound activates, driving the intruder out of the premises. The powerful Sound Barrier projects 125db of ear-piercing sound besides other special frequencies causing a person to immediately modify their behavior, typically using both hands to cover their ears and leaving the area immediately. It is also very effective because it completely breaks down communications.

The patented sound generator produces a highly complex spectrum that is extremely disruptive to the human brain. It produces four tones (frequency range 2-5kHz) simultaneously and forces these tones to oscillate wildly and rapidly. The dynamic nature of the resultant spectrum renders the brain incapable of identifying and thus “blocking out” the din – which is exactly what it does to the simple and static twin tones of a conventional alarm system siren. However, the sound spectrum is but one part of this security system. Amplified and broadcast at 125dB, the resultant effect is almost debilitating. As the seconds pass and the brain fails to cope, the intensity builds rapidly until the command to retreat is issued. Failure to vacate the protected zone provokes differing reactions from nausea, inability to concentrate and communicate, disorientation to vertigo. The dynamic nature of the spectrum has a beneficial side effect: it is extremely difficult to locate the source of the sound, ensuring that the intruder cannot readily eliminate the cause of distress.

Unlike a standard alarm system with sirens that can be and are ignored, the Inferno sound barrier is impossible to ignore. A standard security siren is just a passive device that alerts the intruder that he has been detected; while unpleasant, it’s certainly tolerable (at least for the few minutes needed to grab valuable asset). Contrast the Inferno sound barrier, which also alerts the intruder but most importantly, it actively forces him to leave the protected area immediately.

Inferno uses a patented frequency pattern that generates the most unbearable of sounds. The frequency creates an insufferable, piercing noise. This separates Inferno from conventional alarms that merely emit a consistent sound to which the human ear can adapt, and learn to tolerate.

Imagine this scenario: an intruder has forced his way into your premises. What do you want to happen next? If you answered: “I want him to leave immediately!” or something less polite, we ask you this: “What does your current security alarm system do to ensure that this happens?”

I already have a high-tech security alarm system, complete with CCTV cameras.
Why do I need a Sound Barrier as well?

While most modern alarm systems are certainly quite capable, they are essentially passive devices that at best, will dispatch a security guard. Intruders are well aware of typical security response times, and as such, they act with impunity in this “window of opportunity”. That window given to the intruder can prove very costly indeed. CCTV systems are outstanding if they can be used to identify the intruder, however that won’t undo the damage and losses incurred. Forcing the intruder to exit immediately, empty-handed and without confrontation, is surely the ultimate solution to any intrusion and this is what a sound barrier will do.

Can it damage your hearing?

Any loud sound source can damage your hearing if used inappropriately. A report by the Royal Institute of Technology’s Technical Acoustics department (Stockholm) concluded that the sound barrier was harmless, and that only frequent & prolonged exposure would cause hearing damage. The sound barrier does not exceed the parameters as established in the internationally recognized ISO standard for noise induced hearing impairment. The report determined that one would have to be exposed to the sound barrier for 1 minute, at a distance of 1 metre, for 365 days, to have a 13% risk of hearing damage. The physical effects of exposure disappear shortly after the siren is switched off.

No, not even close. In fact, you’d require 32 standard piezos to generate 125db (the sound pressure generated by a single Intenso sound barrier). The extreme volume of the sound barrier plays but a small part in its effectiveness –(the intolerability of the sound owes much more to the dynamic nature of the sound spectrum generated). With its static tones, the piezo is incapable of generating an intolerable tone. In addition, multiple piezos installed in the same location actually begin to cancel each other out and reduce the impact of the sound. 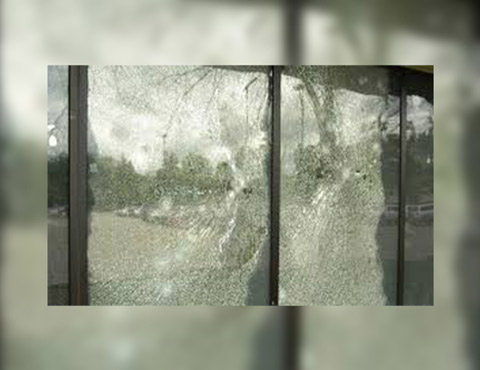 Dragon Skin security film for windows is a revolutionary security film that is placed on glass showcases, doors and cabinets. It is designed to stop thieves from being able to smash and grab.

When laminate-treated glass is broken, the sheet of security laminate and the anchoring system hold the glass fragments in place, creating a solid barrier. This smashed-glass barrier dissipates the force of any further blows, denying the burglar entry.

Security Window Film is the most recommended security product for delaying and/or deterring an unwanted intruder. Our goal is to prevent entry through the most vulnerable part of the building – the glass. Surprisingly affordable, yet durable enough to handle severe attacks security window film is a great first line for security defence.

Bonds the filmed window to the frame, offering the highest level of protection when combined with the safety window films listed above.
There are two components to a properly designed security widow film installation. It must be considered a system, and one component is not complete without the other.

The Impact Protection System is the black border seen in this photo of a typical storefront window and frame. The system is designed to bond the clear security film and glass to the window frame, so even when the glass is broken it will not be easily dislodged from the frame. Without this important step, security window films are not effective. 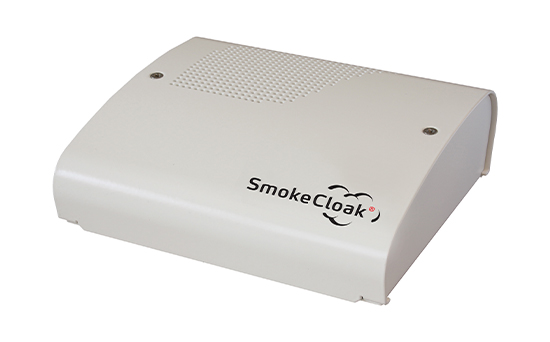 The IPA 117 Intimidator works on a completely different method of restricting the offenders movement against the method of protection offered with the Smokecloak System.
Whilst the Smokecloak System produces a impenetrable cloud of dry vapour and limits the offenders vision and ability to locate the product , the IPA 117 Intimidator produces an environment that becomes simply unbearable to remain within.
This is the result of the IPA 117 Intimidator producing a completely disorientating 117db high pitch audio level. The pitch is such that it works on the inner ear of the offender and makes for a SAFE yet perceived painful and disorientating situation.
The unit is 100% safe and legal for use.

Why does it work?

The human body is a fine tuned machine that relies on all senses to accomplish a task or fulfil a movement. If any of these senses are interfered with or removed the task of functioning correctly is greatly affected and consequently the brains ability to react normally is evaporated.
From the perspective of an offender who’s primary objective is to enter fast, locate, remove and exit fast they rely on two main attributes of the human body. The ability of vision and concentration. They need to be at a primary focus level.
By interfering with this focus level in any manner that is severe enough to disorientate the brains normal evaluation process will directly affect the offenders ability to proceed.
The Smokecloak System works on one level by removing the offenders ability to locate the product within the premises. The offenders prime objective of entering, locating, removing and exiting fast becomes redundant and his brain having evaluated in milliseconds the hostility of this environment exits immediately. This is vision depravation and is extremely successful in protecting your product or merchandise.

Expanding on from this, yet at the same time following the same principle of senses depravation is the debilitating effect of the IPA 117 Intimidator.

Unlike conventional alarm siren that transmit at a steady independent frequency , the IPA 117 Intimidator covers a frequency spectrum from 2 – 4khz. Within that frequency range multiple tones are produced and oscillate in a random pattern. These oscillating and random frequencies interact with the inner ear that directly effects the offenders balance and sense of well being. Combined with this effect is the signal amplification that results in the penetrating 117db that enters into the sensory pattern. The brain is constantly addressing all senses to exit immediately, the longer he stays the worse he will feel. The offenders ability to enter, locate, remove and exit has again become redundant. Placed into this hostile environment with increased limitations as he remains leave the offender no option but to exit immediately. This is depravation of the senses that is accomplished by affecting the inner ear of the human body and transmit danger signals to the brain. 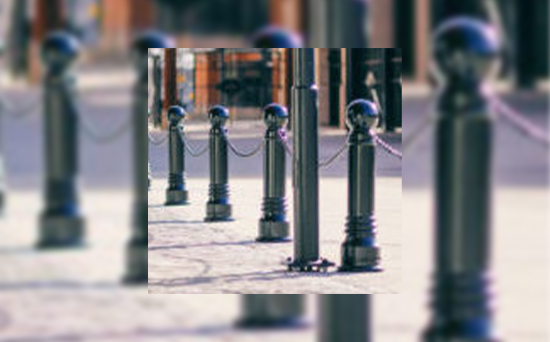 Dragon’s Claw Security Bollards provide solid, uncompromising protection against vehicular incursion. Permanently embedded barriers offer dependable protection. They create a physical deter-ant for vehicles. They protect buildings from oncoming vehicles while allowing free movement in between. Our Dragon’s Teeth act as both a physical and visual barrier. Bollards are a fundamental part to a perimeter security solution. They are designed to physically stop unauthorized vehicles from entering or exiting an area. They literally are a wall designed to stop a vehicle in their tracks. Bollards can be an attractive addition to any environment. They come in many styles and colours to match any decor requirements. 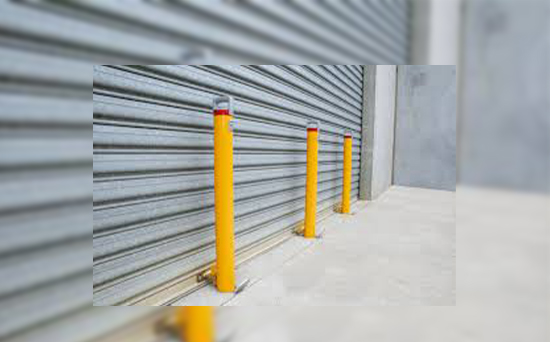 Bollards are used to secure the main access to your shop front or warehouse entrance. You need to be thinking about a vehicle ram attack on your business. We offer a wide array of security bollards to protect this type of asset.

Available in Steel, Stainless Steel & Polyurethane & available to order in a choice of sizes, colours, designs & budgets to compliment and secure any location. 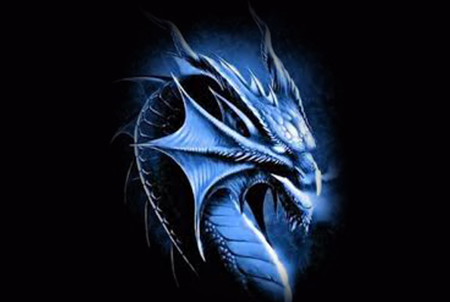 Day or night if you need assistance with your security system or equipment, Dragon’s Breath Security has technicians ready for any emergency service.

Should your SmokeCloak equipment fail. Your Dragon Shield agreement will cover all costs related to the install of a new SmokeCloak to replace the defective equipment.

Should you have a security breach and your Dragon Skin security film has been damaged or compromised, Dragon’s Breath Security will apply new film on the compromised area.

SmokeCloak is the ultimate in defensive security technology. It does require fluid replacement and top-ups. This is included with your Dragon Shield Program.

Dragon’s Breath Security professionals will test and make sure all your security systems are functioning properly.

Should a power failure occur, your Dragon’s Breath Security Systems all have battery back up. It is important that they are checked and replaced when needed. This is another great benefit of the Dragon Shield Service Agreement.

Your equipment is only as good as your operators. Dragon’s Breath Security experts will visit your staff and make sure they understand the technology and how to deploy it. We need to remind your staff of security risks and why they need to be pro-active when it comes to security defense.

Should you have a break in at your business, Dragon Shield will provide a security guard to watch your premises until morning so you can go and get a good night sleep until morning.