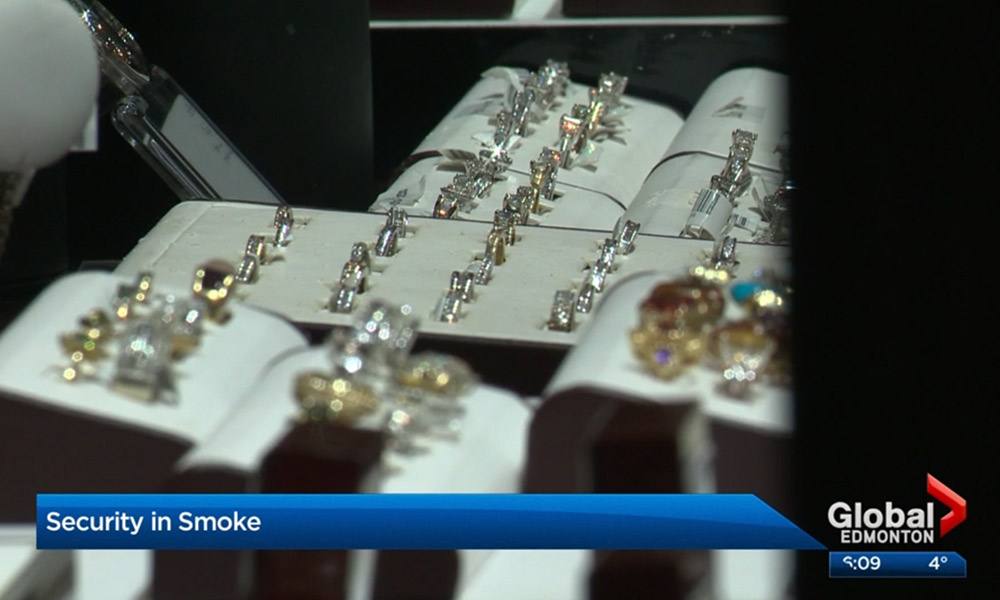 Beck Antiques and Jewellery in southeast Edmonton is hoping a unique addition to its security measures will turn robbers away by blinding them with smoke.

“In this business, we have millions of dollars of diamonds and gold and treasures, things like that. You need to be proactive in protecting that.”

Beck has always used the more typical defence mechanisms: security film on the glass, bars on the windows and doors and magnetic locks preventing customers from entering or leaving the store without a staff member’s OK.

The store also has an alarm system.

“But they really are just a minor deterrent nowadays because most criminals do not care about the alarm,” Beck said. “Because there’s so many alarms going off all the time that the police cannot respond in time.”

Even the store’s numerous surveillance cameras don’t appear to help.

“Thieves know to come with their faces covered,” said Samantha Vandenbrink, who works at the store. “We have two cameras literally staring you in the face when you enter the door. It’s not a deterrent. It’s like, OK, you can watch it once it’s happened.”

So Beck decided to invest in a smoke machine from Dragon’s Breath Security. He likes it so much he bought into the company.

“The second they smash your door, the place fills up with smoke,” he said.

“They can no longer see anything inside the business. You can’t stumble around inside looking for something to steal. So basically, it ends the robbery at that point in time.”

In June, Beck Antiques and Jewellery was broken into. Thieves used a makeshift battering ram in the back of a minivan to smash through the film, glass and bars all at once.

“The smoke machine then deployed and then made it impossible for them to see, so they had to leave immediately. So it really limits the amount of loss and damage,” Beck said.

While the break-in was still destructive, only a few hundred dollars worth of product was successfully taken.

“The fluid is created out of food-based glycol and demineralized water — no different from a nightclub fog machine.”

The unit Beck purchased cost about $7,000 and can fill a space of 400 cubic metres in about 30 seconds and leaving no residue.

“Having the smoke machine just provides a sense of relief. I don’t have to worry,” Vandenbrink said.

“Even if somebody were to approach me in the store in an armed robbery situation, I know that as long as I’m cool, all I have to do is reach up, push the button and the situation has come to an end… it’s a huge comfort.”

Gaboury said using smoke to thwart robberies is common in Europe, but the technology is just starting to be noticed in Canada.

Ten companies in Alberta are currently using the smoke cloak.

“We’ve had pharmacies that are interested, jewelry stores, we’ve even had engineering firms looking to protect sensitive data on their computers,” Gaboury said.

Beck thinks it would be useful for any business that’s open late at night.

“If you’re working behind the counter at a convenience store at two in the morning and you see someone get out of their vehicle with a baseball bat or a gun, you can deploy the system instantly and then eliminate the threat.”